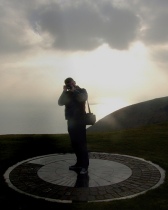 History of the Compass!

The magnetic compass was probably developed by combining the wind rose and the lodestone. From this device it is supposed the compass rose evolved. A wind rose was glued to the top of a lodestone and placed in a covered container of water. Later, oils were used instead of water to stabilize the compass disk from erratic movement…more